BACK TO INDEX
Disclaimer: The opinions expressed in this article are those of the author and are not necessarily those of Ottawa Jazz Happenings or of JazzWorks Canada.
Overview

Well, it’s been quite a year for a band, hasn’t it? Maybe you’re wondering whether Cuppa Joe simply hung up our mics, or attempted to rehearse or even gig. Well, here’s our story: March 2020 to February 2021.

The 5-second summary: we had three gigs during this 11-month period — two in-person performances and one live stream — and created two music videos (one of them commissioned). Opportunities arose, and we explored our creativity in new ways.

For those new to us, Cuppa Joe is a mixed (SATB — soprano, alto, tenor, bass) vocal (a cappella) jazz quartet whose concert venues have included the NAC’s Fourth Stage, Gigspace, Zolas and Pressed. We’ve also performed for birthdays, anniversaries, retirement parties, and even an engagement dinner.
Bookings as of January 2020

We started off the year with a much heavier-than-average live performance calendar (see Image 1). In addition to our regular gigs, such as our annual ticketed concert, we’d approached a number of retirement homes. At the start of 2020, the combination of booked public and private gigs had us sitting at 15.

We were in great shape by mid-March, had performed five of those gigs, and were in conversation with more venues. 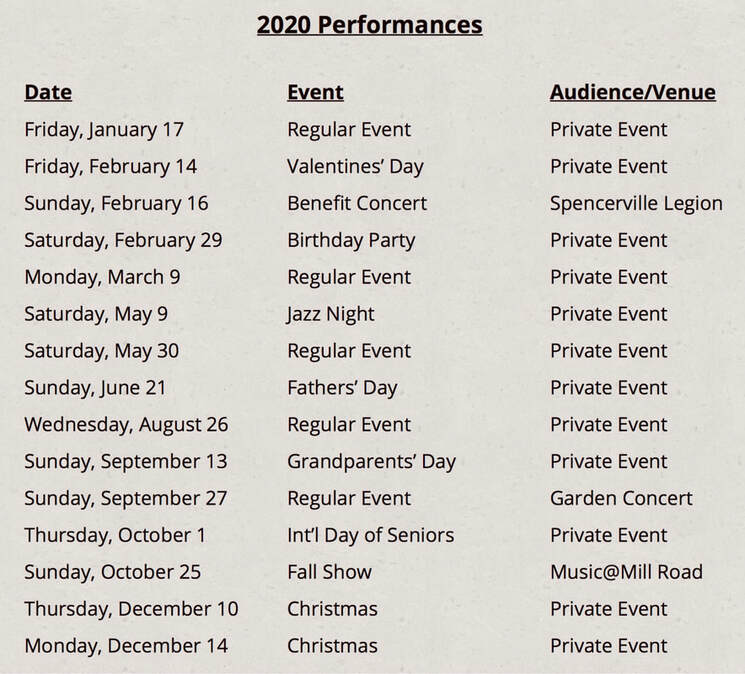 Then, all of a sudden, in mid-March, gigs and rehearsals came to a grinding halt. But we love what we do. So, like many businesses during COVID, we pivoted. Ok, what do I mean, and how did that apply to us as musicians?

Our first COVID decision was to keep our weekly rehearsal time slot in our calendars, but move to Zoom meetings. This worked well for us for the following three reasons:
Rehearsal Techniques: Zoom

After that first mid-March COVID lockdown, we only missed two weeks of rehearsals. Then we started weekly Zoom meetings and worked on new songs and new arrangements. We’d choose a portion of a new tune and each record our part (see Image 2) and everyone would send me their mp3. I’d then use Audacity or GarageBand to mix them and create a blended mix-down of the four voices, which I emailed back so we could all hear and critique our progress. 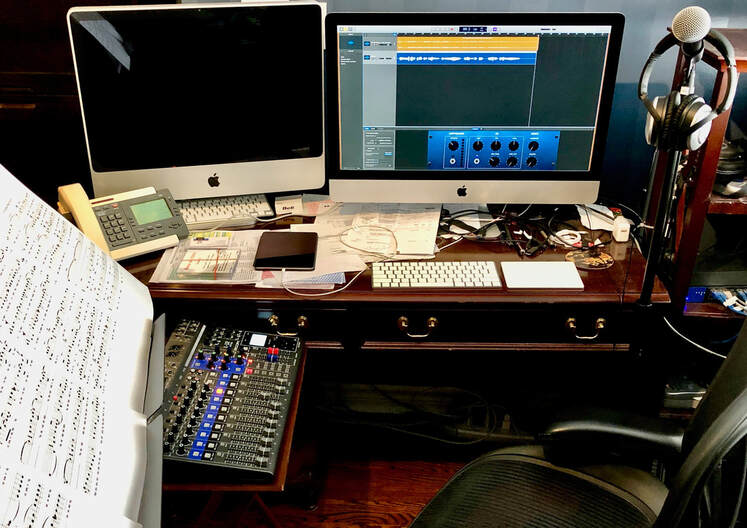 Image 2 — Recording and Mixing Station
This turned out to be a great way to learn new material. It lacked the usual in-person focus on nuanced timing and blending that are needed to progress with existing repertoire, but worked very well for new songs.

It also served well as a way to keep current with one another. It’s amazing how inter-connected we become when we’re a group that meets at least weekly, sharing ideas, charts, arrangements, and singing together both at rehearsals and gigs. We get to know one another very well, and become like family. So, along with making progress on new tunes, these Zoom sessions were a boost to our spirits, affording the opportunity to see one another and chat.
Rehearsal Techniques: Garage; and Performing Al Fresco

​In late June, once we were permitted to be 6-feet distant from one another, we decided to move rehearsals — traditionally held at my place — to Cathy’s two-car garage (see Image 3 — your typical unfinished garage, never expected to be used as a “photographic studio” nor a music one).  With the cars moved out, both garage doors open, and air flow from a side door, we positioned ourselves one in each corner, some 10+ feet apart. 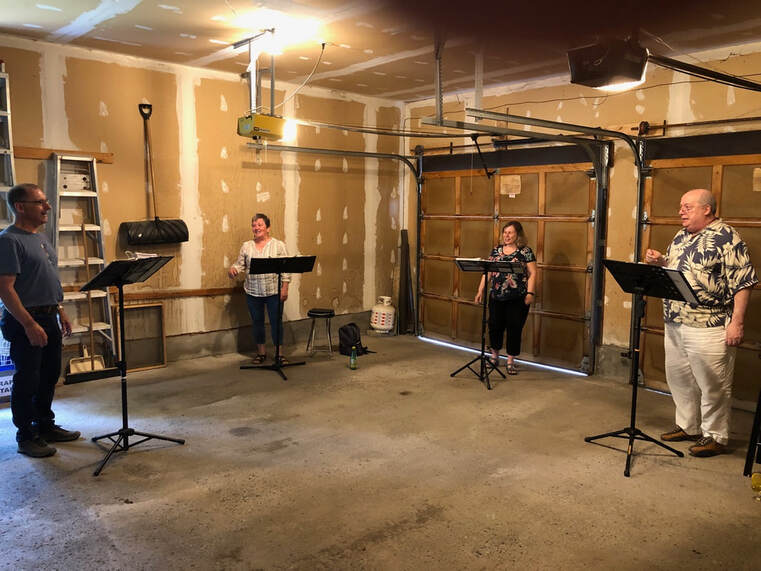 Image 3 — Cuppa Joe as a "Garage Band"
​(main doors closed for photo)
Meanwhile, we’d already identified and started work on our first (“lockdown”) music video — a project just for fun, and just for us. As with our weekly new tune progress, using the audio tracks emailed to me from each Cuppa Joe vocalist, I created the audio mix-down. Image 4 shows a GarageBand window with a selection of audio mp3 tracks from each vocalist for use in developing the mix we wanted. Once done, I emailed that back to everyone, and we each used that as our (new) backing track while video-recording ourselves. The backing track and individual videos were Dropboxed to Mary, who produced the assembled video. Check out the final result by clicking on Feelin’ Groovy. 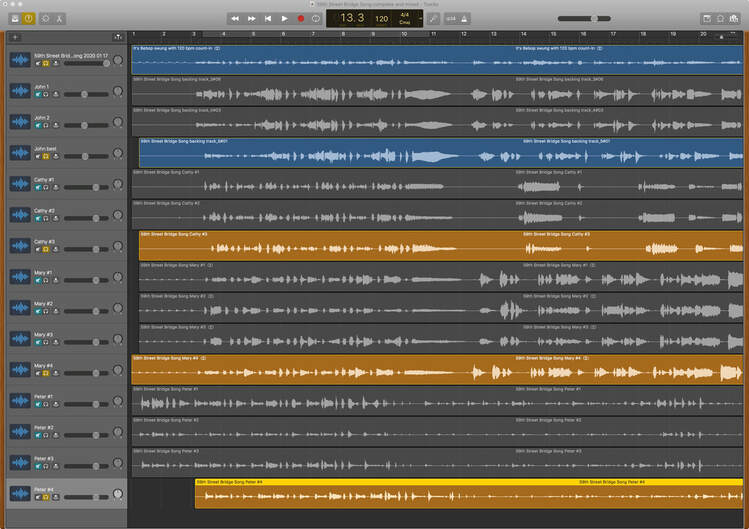 Image 4 — Mixing for our Music Video
​Around this time, we decided to host a small concert in Cathy’s backyard (see Image 5), inspired by her next-door neighbours hearing us rehearsing from the garage and complimenting us. It was great to perform again and we even had a relative of one of the neighbours join the audience from Germany via FaceTime. We also collected money and food donations for the Ottawa Food Bank. 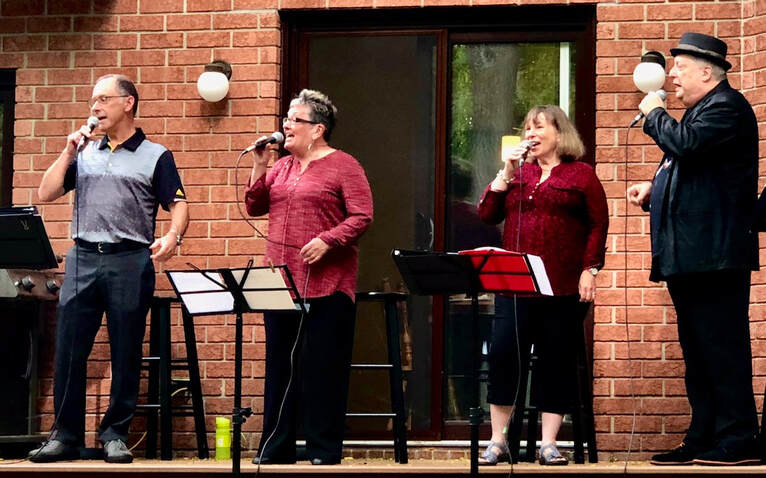 By the end of October, after 16 weeks, it had become too cold to continue using the garage for rehearsals. So we returned to my place, continuing with our weekly in-person sessions, albeit still socially-distanced, each in a corner of the living room.

We’d already contacted each venue in our performance calendar as we approached the scheduled gig dates to confirm with them that they were not hosting entertainment. But we were surprised when a regular said that they’d just been talking about our previous performance there and how much they were looking forward to our upcoming booking.

They informed us that we’d need to be masked from arrival to departure, including when we sang! This was an interesting idea, so we tried it at a rehearsal, and decided to proceed. The concert was held in October, while performing was still permitted, celebrating the International Day of Seniors. The venue handled it very carefully, ensuring all staff and audience members wore masks.

We were masked from the moment we left our cars, while unloading, setting up, singing (as shown in Image 6), tearing down and packing up. It was challenging, but successful.  And the audience was kept a good distance from the stage (de-marked by “crime scene” tape ☺️​) and from approaching us to talk afterwards. 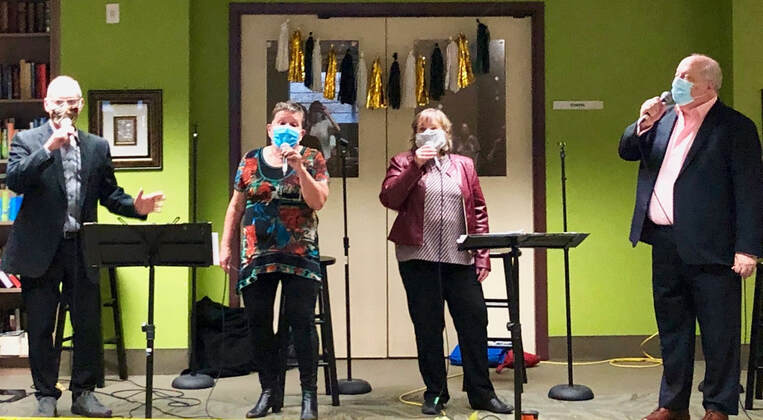 We were invited to perform as a part of the Zolas Stay-at-Home Live Stream Jazz Performance Series (see Image 7), choosing December 15th for our concert.  You can read about the preparation for that gig — as well as some of the results — in my February 17th, 2021 article “Preparing and Testing for a Live Streaming Show”. And for a deeper dive into technical aspects of our show, find more in the February 10th, 2021 article “Live Streaming with a Mixer, a Computer and Streaming Software”. You can watch the video recording of our show either at Cuppa Joe’s Facebook Live show on December 15th, 2020 or from a link on our website’s Performances page. 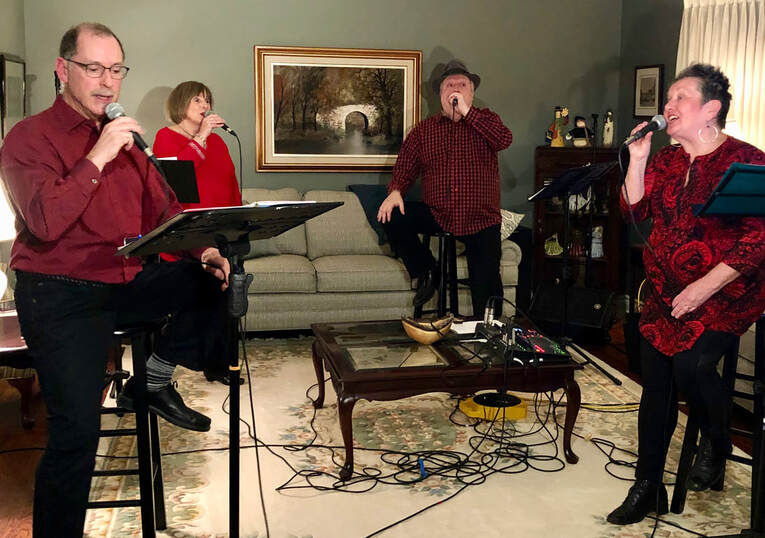 ​In the New Year, with the Boxing Day lockdown in place, we returned to Zoom get-togethers, working on another couple of new tunes.

Then, we were asked to create a music video for a 50th-birthday celebration. We couldn’t get together to sing, so we assembled a video comprising:
As with our first music video, there was much individual audio and video recording, and mixing and emailing of components and assembled parts. The backing track and individual videos were then Dropboxed to Mary, who assembled them, adding some wonderful video graphics she prepared for this project. Then she integrated them with the other components listed above. Our client was very pleased with the result, as were we. Creativity at its best!
Conclusions

It’s been a trying time for everyone. But we’ve found ways to weather it, and support one another while keeping ourselves going with music projects, even if half of our pre-booked gigs were cancelled (as shown in Image 8) and rehearsing in person wasn’t always possible.

Image 8 — Performance Calendar Year-End View
Despite this 2020 upheaval and the loss of much of our gig activity, there was still enough paid work to cover the costs of our yearly contingent of new charts, website and domain name fees, etc., as well as our new mixer.

There’s more fun to be had. Although the past 11 months have not resembled our normal practice, rehearsal nor gig routine, lockdown periods have been good opportunities for us to learn new material. And creating music videos, although significant undertakings, has been an enjoyable activity and has increased our skill set.
Acknowledgements

​It’s such a joy to make music with my colleagues and friends Peter, Mary and Cathy.

Many thanks to Chris Thompson, Peter Feldman and Linda Wilson for their valuable feedback on the article’s drafts.
Cuppa Joe Information

John Wilson is a Professional Engineer who holds a BScEng in Electrical Engineering and an MSc(CS) in Computer Science. His musical background includes fifteen years of piano lessons starting at age five, singing in whatever school choirs and choruses were available to him, and playing trumpet for three years in the school band. He sang in a jazz choir prior to starting ​​​Cuppa Joe in 2008. John may be contacted about this article at j.f.wilson@sympatico.ca.
BACK TO INDEX