Note: Since the beginning of April I've acquired a fair depth and breadth of practical knowledge regarding live streaming musical performances, due to a) my two week technical investigation of Facebook Live and YouTube Live at the beginning of April (see 'Background' below), and b) my organizing the ZOLAS stay-at-home live stream jazz performance series including, as required, mentoring series performers using a range of physical setups on doing live streams (see 'Background' below). Please feel free to phone me (613-692-5380) or email me (chris101t@bell.net) if you would like any advice on/assistance with live streaming your musical performance(s). My fee is a donation of whatever you feel is appropriate to the GoFundMe campaign for the ZOLAS series, every penny of which (after advertising expenses and GoFundMe's service charge) will go to covering performers' fees.

ZOLAS live stream performances start at 7 pm. I ask all ZOLAS live stream performers using Facebook Live to start their live streams twenty minutes earlier – at 6:40 pm, and from 6:40 pm to 7 pm to have a sign for the video just to reassure people what’s going on. The sign doesn’t have to be anything fancy – a hand-written sign on a music stand like the one in Image 1 is fine. 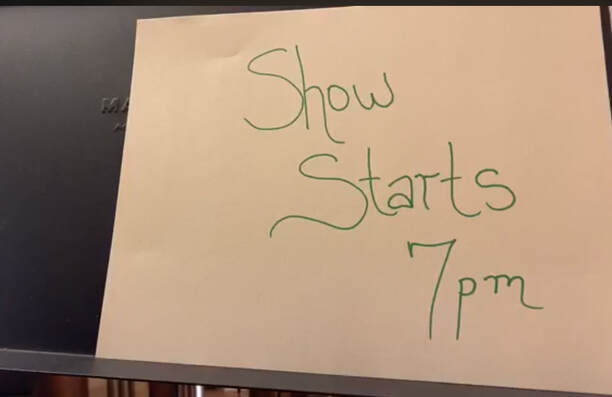 Note: I watch ZOLAS (and other) live stream performances on our home theatre system using a lightning-to-HDMI dongle (example) and a 12’ HDMI cable (example) which plugs into our TV. I much prefer this solution to a) trying to access the live stream on our smart TV (the web browser user interface is hopeless), or b) a wireless connection between my iPad and our smart TV, because it’s ‘plug-and-play’ with no setup on the iPad or TV required (except selecting the appropriate HDMI input on the TV). I connect my iPad to our TV using the dongle and HDMI cable, select the appropriate HDMI input on the TV, and the iPad screen is automatically ‘mirrored’ on the TV screen, and the iPad audio automatically plays through our home theatre sound system. How cool is that! I need a few minutes to physically set this up, find the live stream post, and ensure that the video and audio are working properly before the performance starts.

3.  This lets the performer make sure their audio and video are working before the actual performance starts, through viewers’ comments or, in the case of the ZOLAS live streams, my noticing that something is wrong. As discussed in my September 23rd, 2020, article ‘Twelve Technical and non-Technical Tips for Live Streaming Musical Performances – Tip 5 UPDATED ‘Do NOT Use a Computer For Your Live Stream’’, in the case of Roddy Ellias’s September 15th, 2020 ZOLAS live stream I noticed that there was no background music and phoned Roddy. During the first few minutes of the video of the live stream you can hear Roddy and me on the phone discussing the issue. If there had been no background music, the viewers and I wouldn’t have known that there was no audio until Roddy started his actual performance, which would have been much more disruptive to his performance.

IMPORTANT: For Rachelle Behrens’ and Alex Moxon’s November 17th, 2020 ZOLAS live stream, the background music that was being streamed before 7 pm was an American commercial jazz radio station. A few minutes before 7 pm, Facebook terminated the live stream and sent Rachelle the Matching Content Notice in Image 2 below. 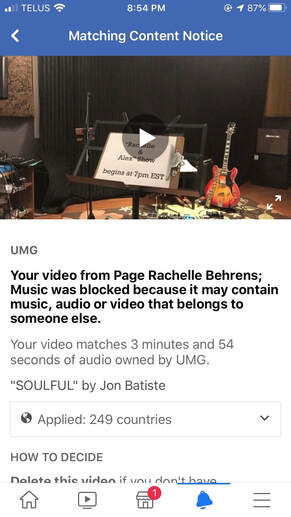 Image 2
My understanding from the above Matching Content Notice is that the issue wasn’t that a radio station was being streamed, but rather the content that the radio station was streaming. Therefore, going forward I’ll suggest that ZOLAS live stream performers use as background music their own music, or at least music that is less likely to be flagged by Facebook. That said, this is the first time in nineteen ZOLAS live streams that this has been an issue. Note that Rachelle’s and Alex’s live stream was re-initiated and they started their performance which was a great show and had no further issues.​

I’ve had some ‘push-back’ from at least one ZOLAS performer to this twenty minutes, since the twenty minutes becomes the first part of the recorded video of the live stream performance. However, I feel that the disadvantage of having to ‘shuttle’ through the first twenty minutes of the video of a live stream by moving the slider to the right in order to get to where the actual performance starts is greatly outweighed by the reasons above. In fact, if you think of this as ‘doors open at 6:40 pm’, then starting the live stream before the performance seems obvious. Imagine a live performance starting at 7 pm where the doors open at 7 pm – the performers have already started playing while audience members are coming in, finding their seats, taking off their coats, and getting ready.

I’m a retired Professional Engineer (degree in Electrical Engineering). I worked for 23 years at Bell-Northern Research/Nortel in Ottawa, Canada, designing telecommunications services. I’ve been playing drums and electric bass in gigging big bands and small jazz ensembles since 1970 (fifty years!). Playing in bands kept me sane when I was in school and working, and is now (or at least it has been until this year) my major retirement activity. I’m currently the drummer in the big band Standing Room Only and was the bass player in the bossa nova trio Wave until it disbanded (pun intended) in December 2019. Having a technical background and being a gigging musician is proving very valuable for my involvement with live streaming musical performances, since I can bridge the two areas.
I’m currently organizing the ZOLAS stay-at-home live stream jazz performance series. There have been nineteen live stream performances in the series so far: 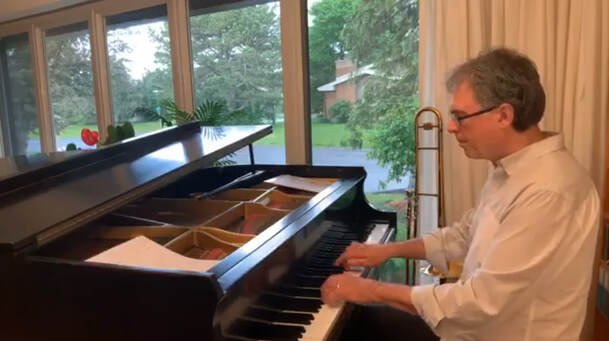 10. Start your live stream BEFORE the start of your actual performance
11. Use a computer (PC or Mac), tablet (e.g. iPad), or smartphone (e.g. iPhone) as a ‘viewer’
12. Don’t erase your recorded live stream
Comments