From what I’ve seen, by far the most popular live streaming services for stay-at-home musical performances (probably because they’re both free) are Facebook Live and YouTube Live.

During my detailed technical investigation of Facebook Live and YouTube Live at the beginning of April (see ‘Background’ below), I set up numerous end-to-end test live streams in order to understand how the two services work, understand the differences, and identify serious and less serious issues. Based on a) the results of this technical investigation, and b) my experience to date organizing the ‘ZOLAS Live Jazz Saturday Nights ONLINE!’ live stream performance series (http://zolas.ca/events), my conclusion is that, like ‘live live streaming’ and ‘prerecorded live streaming’ (see my article ‘Live vs Pre-Recorded Live Streams – Which Viewers Prefer and Why’), each has its own pros and cons:


It’s not surprising that YouTube Live offers better audio and video quality and Facebook Live offers better ‘chat’ capability. YouTube is inherently about ‘video’, and so the audio and video quality of YouTube Live streams is better, while Facebook is inherently about ‘social networking’, and so it’s better with respect to comments (aka ‘chat’) and, in turn, performer/viewer interaction. 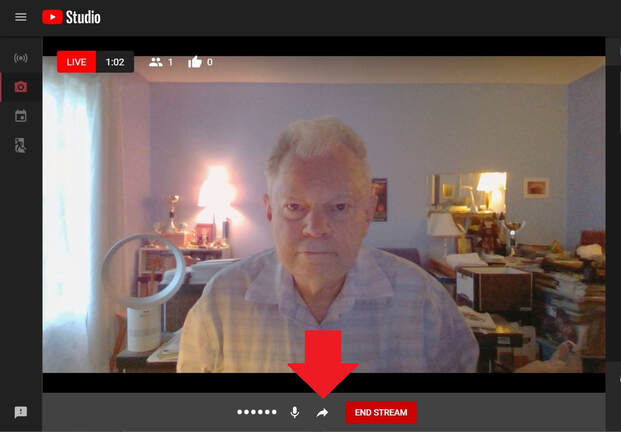 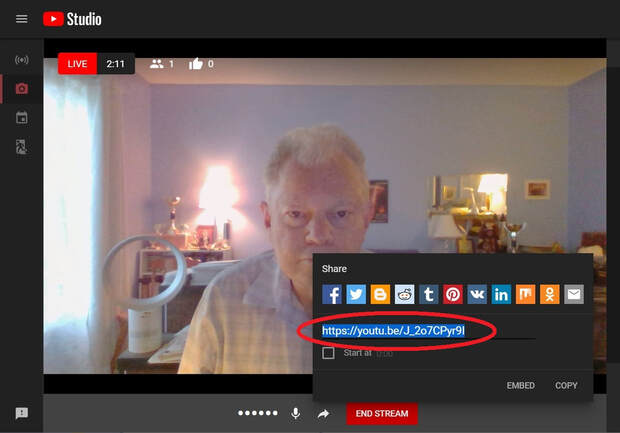 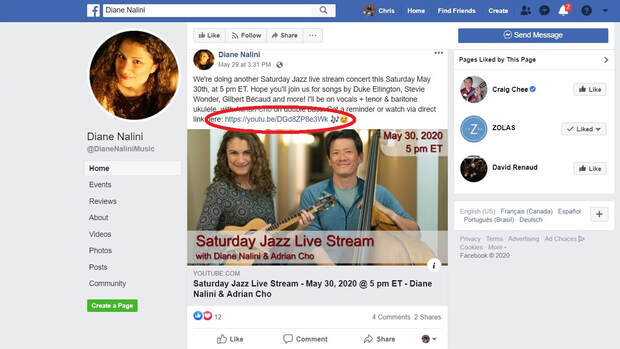 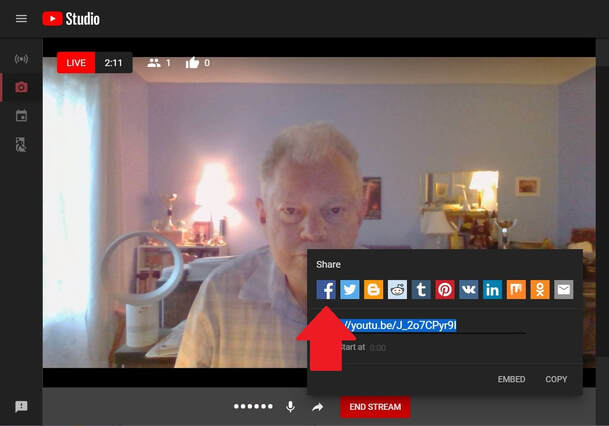 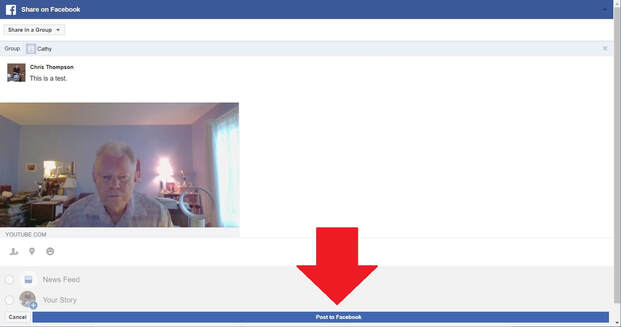 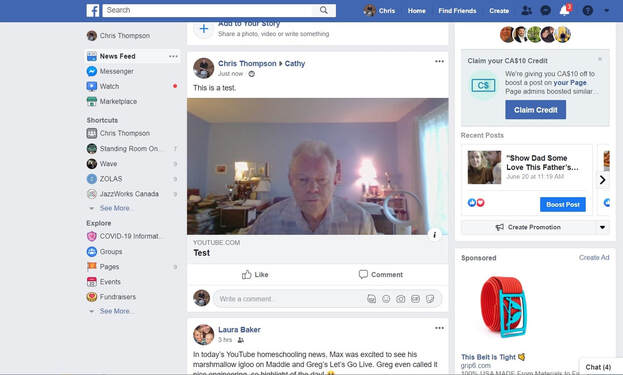 You Can’t Get There From Here

The setup for Roddy Ellias's ZOLAS live stream performance on May 23rd was fairly simple and straightforward – his Shure MV88+ USB microphone plugged into his iMac computer, with the MV88+ used as the audio source and his iMac’s built-in webcam used as the video source for his live stream performance. However, we ran into major problems with being able to select the audio and video sources on the Facebook Live stream setup page. After two looong and painful Zoom meetings, one of which involved inviting John Wilson to join the meeting (thanks, John) – John also has an iMac (I have a PC laptop), we determined that the problem was the web browser. In fact, the only web browser that would work with Facebook Live on Roddy’s iMac was the Beta version of Chrome.

“If you are experiencing an audio issue, you may need to close any browser tabs or applications that you're not using. You may also need to update your browser and download the latest beta version of Chrome here or use Firefox and try again. As a reminder, Live Producer is not fully supported in Safari, Internet Explorer, or older versions of Edge.” 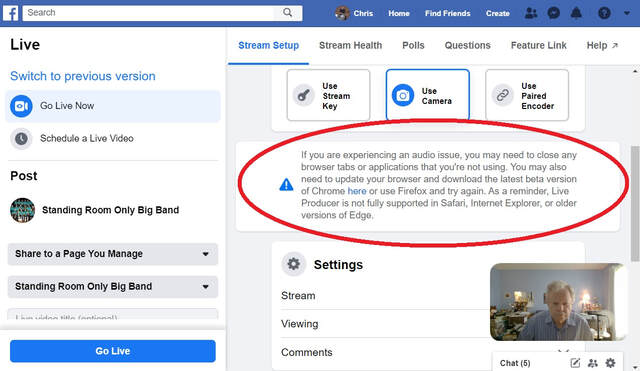 Image 7
​I have discovered that, like on Roddy’s iMac, on my PC laptop there is no production web browser that works properly with Facebook Live and that the only web browser that does work properly (so far) is the Beta version of Chrome. I find this incredible. It reinforces my conclusion that Facebook Live was never designed for what it is currently being used for – live streaming musical performances to dozens, hundreds, and even thousands of viewers. It was designed for users with smartphones on vacation live streaming, for example, walking through a park in Paris to friends and family back home. The lack of support by standard web browsers, the interworking issues with YouTube, and the various other major and minor issues I have encountered with Facebook Live indicate to me that it is not currently a professional-level live streaming service.

The ZOLAS live stream performance series uses (mainly) Facebook for promoting and providing access to the live streams. My own feeling, which I believe is shared by most viewers (see my article ‘Live vs Pre-recorded Live Streams – Which Viewers Prefer and Why’), is that Facebook Live’s better interaction (the ability to reply to comments) and easy access to the actual live streams (video thumbnail embedded in a Facebook post) is more important than better audio and video quality. Facebook Live’s audio and video quality is not as good as that of YouTube Live but, in my opinion is ‘good enough’. Therefore, despite its limitations (sigh), I am going to continue to ask ZOLAS live stream performers to use Facebook Live.
Background 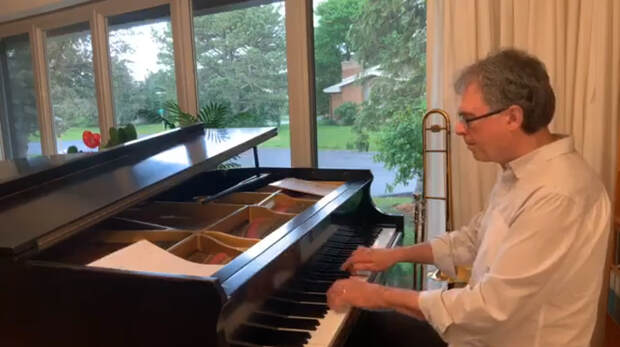 Image 8
Organizing the series includes having Zoom meetings with the performers in the series as required (some of them are self-admitted ‘luddites’, so our Zoom meetings are looong and painful, although by the end I get them ‘from zero to sixty’) to a) determine the best technical setup for their live stream performance, b) do a step-by-step walk-through of how to set up and initiate a live stream, and c) do a test end-to-end live stream. I’ve authored a detailed technical user guide ‘Live Streaming Stay-at-Home Musical Performances – Technical User Guide’ for the performers to use as a reference document after our Zoom meeting, and which you can access (read only) at this URL. Appendix B of the reference document provides twelve technical and non-technical tips on live streaming musical performances based on my technical investigation and on the experiences from the ZOLAS live stream performances so far:
​
Technical Tips
​
Non-Technical Tips