When Using a Mixer as Your External Audio Source’

Note: Since the beginning of April I've acquired a fair depth and breadth of practical knowledge regarding live streaming musical performances, due to a) my two week technical investigation of Facebook Live and YouTube Live at the beginning of April (see 'Background' below), and b) my organizing the 'ZOLAS Live Jazz Saturday Nights ONLINE!' live stream performance series including, as required, mentoring series performers using a range of physical setups on doing live streams (see 'Background' below). Please feel free to phone me (613-692-5380) or email me (chris101t@bell.net) if you would like any advice on/assistance with live streaming your musical performance(s). My fee is a donation of whatever you feel is appropriate to the GoFundMe campaign for the ZOLAS series, every penny of which (after promotion expenses and GoFundMe's service charge) will go to covering performers' fees.
​
Introduction

This article assumes that:

Note that the built-in webcams of iPhones and iPads are high quality video cameras. In fact, as discussed in my July 15th, 2020, article ‘Twelve Technical and non-Technical Tips for Live Streaming Musical Performances – Tip 5 ‘Use a Computer For Your Live Stream’’, for Elise Letourneau's and Tim Bedner's ZOLAS live stream on May 30th, which was pre-recorded in the GigSpace Performance Studio in Ottawa, four iPhones were used as the video cameras for the multi-camera setup. The webcams in the iPhones provided just as good video quality as dedicated video cameras would have, and the iPhones were less expensive than dedicated video cameras would have been. Furthermore, even though some built-in webcams and external webcams are not as good quality, they are good enough for live streamed musical performances since the video quality for live streamed musical performances is not as important as the audio quality.


Each of these is discussed in detail in Section 2.1. ‘Audio Source’ in my ‘Live Streaming Stay-at-Home Musical Performances – Technical User Guide’ which you can access (read only) at this URL.
My August 19th, 2020, article ‘Twelve Technical and non-Technical Tips for Live Streaming Musical Performances – Tip 8 ‘Use a ‘VHS to DVD Converter’ to Connect a Non-USB Mixer to Your Computer’’ discusses using a USB mixer or a non-USB mixer as an external audio source for live streamed musical performances.

Connecting a keyboard to a mixer is very straightforward – the Line Out on the keyboard is directly connected to the Line In of one of the mixer channels using a stereo ¼” male to ¼” male cable, as shown in Image 1. Here’s an example of a 10 foot/3 meter cable sold by amazon.ca for Cdn$15.99 that would be suitable. 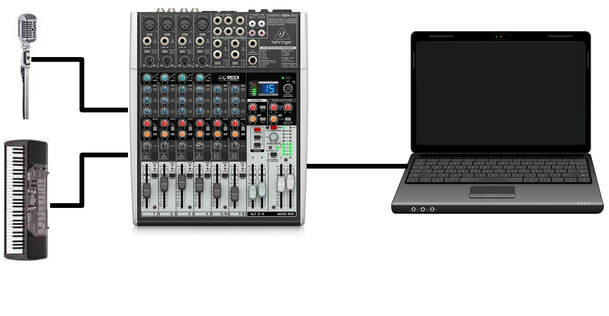 Image 1
There are (at least) four ways to have an electric guitar or electric bass with its own guitar or bass amp go through the mixer. 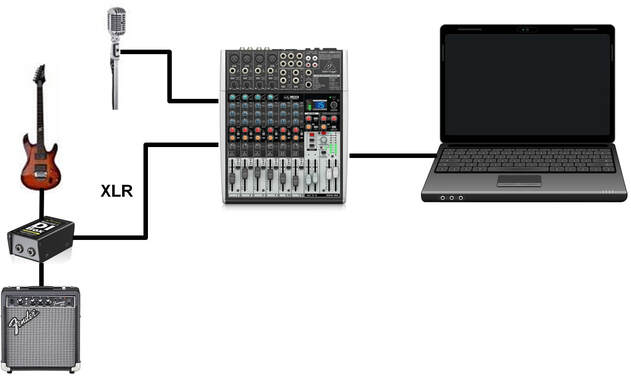 Image 2
DI Out on Amplifier

Some guitar and bass amplifiers have a built-in DI box with a ‘DI Out’ jack which is connected to the mixer using an XLR cable as shown in Image 3.

Image 3
Line Out on Amplifier

The easiest way for an electric guitar or electric bass to go through the mixer is to simply mic their amps, as shown in Image 5. The YouTube video https://www.youtube.com/watch?time_continue=4&v=g7nCHGzacgY&feature=emb_logo is a tutorial by a CBC sound engineer (i.e. an expert) on how to mic a guitar amp. With this approach, the input to the mixer not only is after and includes any equalization and/or special effects added by the guitar or bass amp, but also includes any acoustic qualities added by the amp speaker and enclosure themselves. In other words, the input to the mixer is as close to the sound of the guitar or bass amplifier as possible. 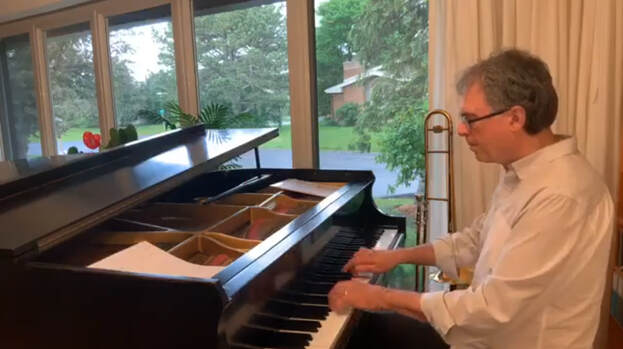 Image 6
Organizing the series includes having Zoom meetings with the performers in the series as required (some of them are self-admitted ‘luddites’, so our Zoom meetings are looong and painful, although by the end I get them ‘from zero to sixty’) to a) determine the best technical setup for their live stream performance, b) do a step-by-step walk-through of how to set up and initiate a live stream, and c) do a test end-to-end live stream. I’ve authored a detailed technical user guide ‘Live Streaming Stay-at-Home Musical Performances – Technical User Guide’ for the performers to use as a reference document after our Zoom meeting, and which you can access (read only) at this URL. Appendix B of the reference document provides twelve technical and non-technical tips on live streaming musical performances based on my technical investigation and on the experiences from the ZOLAS live stream performances so far:
​
Technical Tips
​
Non-Technical Tips

​Davina Pearl, 16-August-2020 - "​I very much appreciate all the careful thought that you put into your articles. It’s an amazing way of supporting our little community during these times. It’s heartening to read them, and to build hope that we will find some excellent ways to overcome the challenges of our new reality.”​

Devon Woods, 17-June-2020 - "Very interesting and relevant series of articles by Chris Thompson."
BACK TO INDEX