​Tip 5 ‘Use a Computer For Your Live Stream’

This is the fifth in a series of twelve articles. Each article discusses in detail a technical or non-technical tip for doing live streamed musical performances. This article discusses Tip 5 ‘Use a Computer For Your Live Stream’.

​Tip 5 – Use a Computer For Your Live Stream

This article discusses the pros and cons of using computers (Mac or PC), tablets (iPad or Android), and smartphones (iPhone or Android) for live streams using Facebook Live, since this is what I am familiar with:


To date, ZOLAS live stream performers using Facebook Live have initiated their live streams on Macs, iPads, and iPhones. The following discusses the pros and cons of using each of these devices in terms of using external audio and video sources, capabilities, viewer comments, wired vs wireless LAN connection, and positioning the webcam. 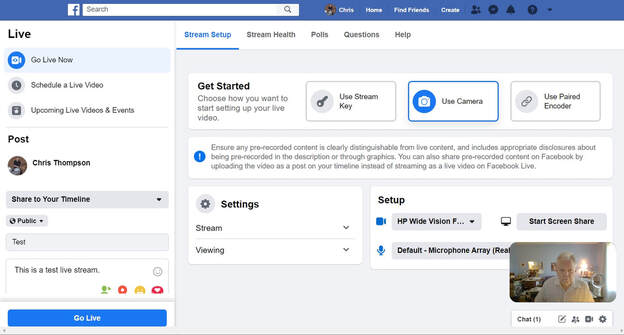 Image 1
​Image 2 is the Facebook Live setup screen when initiating a live stream on an iPad. 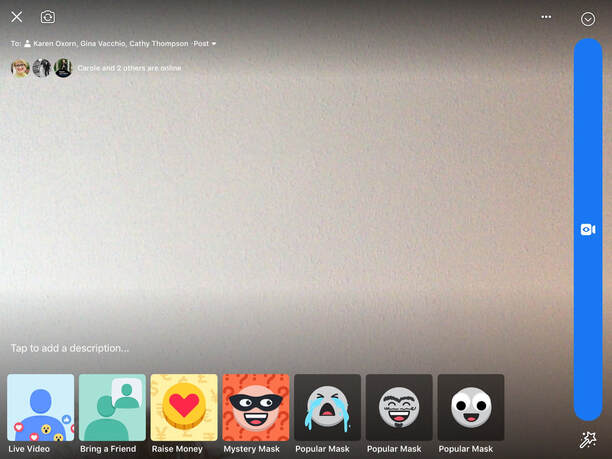 The Facebook Live stream setup screen in Image 2 (iPad) does not allow selecting either an external video source or an external audio source. However: 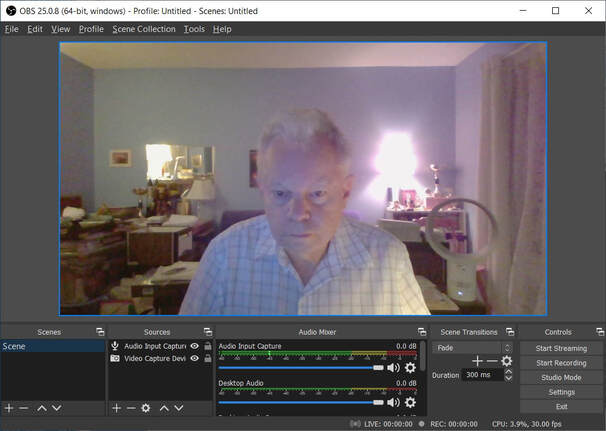 ZOLAS live stream viewers have told me that the performer(s) interacting with viewers’ comments is what puts the ‘live’ in ‘live stream’ (see my June 17th, 2020, article ‘Live vs Pre-Recorded Live Streams – Which Viewers Prefer and Why’). As a result, I ask ZOLAS live stream performers to stop from time to time during their performance (e.g. after every tune or two) and check/react to viewers’ comments. It is therefore necessary that the performer(s) be able to easily read the viewers’ comments. With a computer, the comments are displayed on the left of the screen, as shown in Image 4. 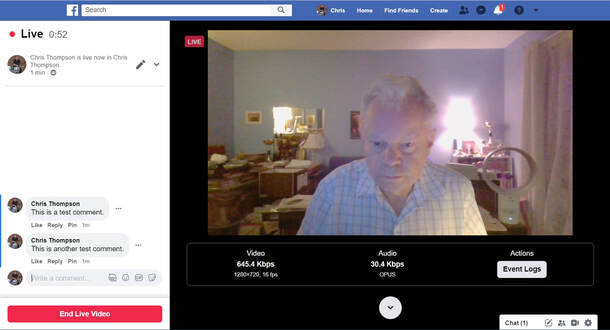 Image 4
​However, with an iPad or an iPhone, the comments are displayed superimposed on the video and only the most recent comment is displayed, as shown in Image 5 ... 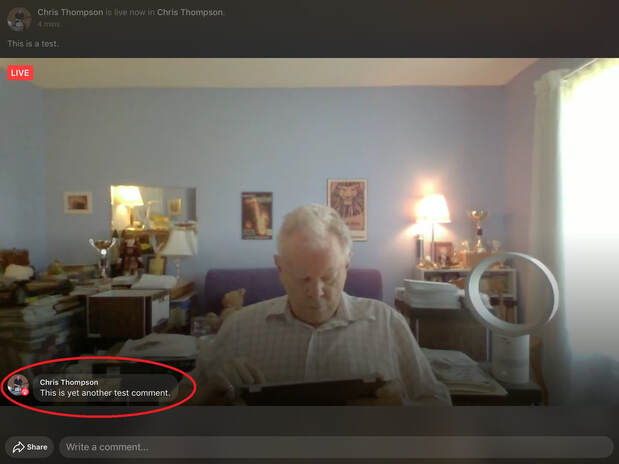 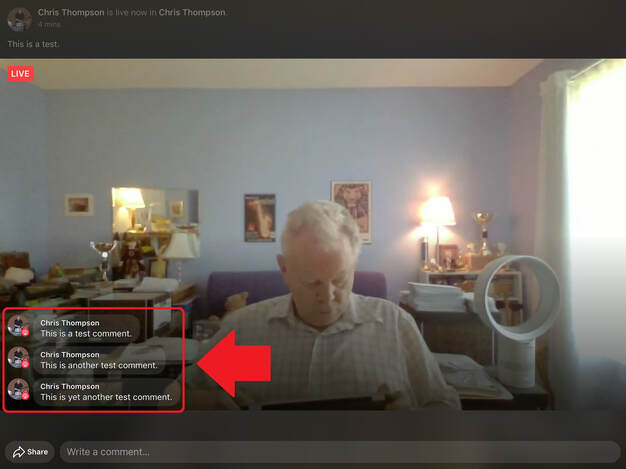 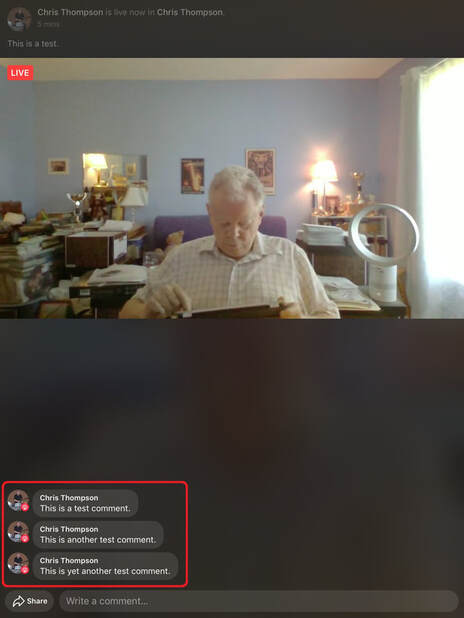 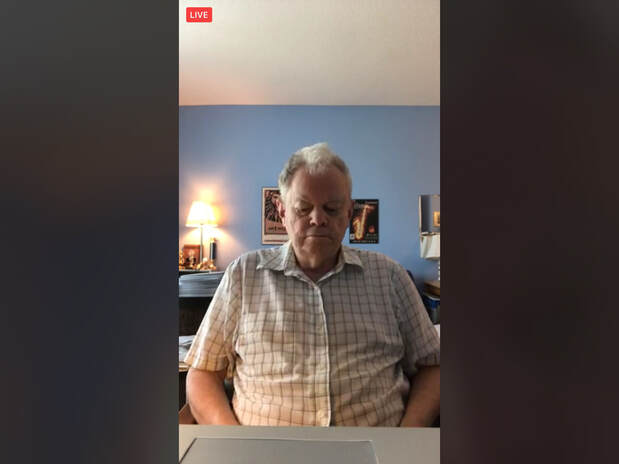 Image 8
​In addition, if an an iPad or iPhone is used to initiate the live stream, it must be positioned so that video produced by the built-in webcam is framed properly. The iPad or iPhone will typically be positioned several feet from a soloist, and across the room for a duo, making it difficult or impossible for the performer(s) to read the viewers’ comments on the iPad or (especially) iPhone screen. On the other hand, a computer screen is typically larger than the screen of an iPad or (especially) iPhone, and so makes it easier for for the performer(s) to read the viewers’ comments. 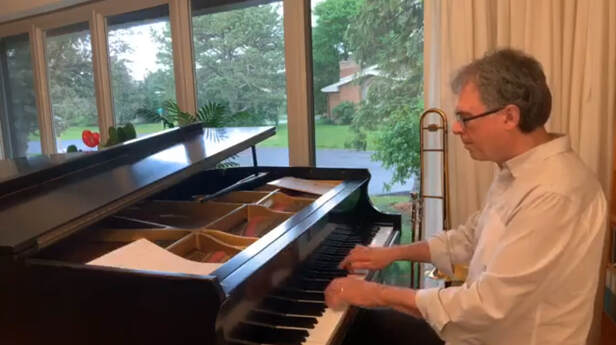 Image 9
Having a separate device – a computer, a tablet, or a smartphone – to read viewers’ comments also allows the performer(s) to see if anything is wrong with the live stream, because they are seeing exactly the same thing as the viewers. Otherwise, they might not know, based on what they seeing on the screen of the device initiating the live stream.

In his July 8th, 2020, article ‘Jamkazam for Live Remote Ensemble Practices’, Allan Siburt says “Don’t try to connect locally using Wi-Fi. While pretty fast, Wi-Fi is bursty and creates problems for the (JamKazam) software.”. A computer used to initiate a live stream can be directly connected to the wireless router using an Ethernet cable. As Allan also says in his article, “As a minimum, this means you could just buy a 50 ft (Ethernet) cable (~$20) and unroll it across the house for the few hours you are playing on JamKazam. I’ve run a wire through my heating ducts to get to my studio room from my router.”. As an aside, I made up my own Ethernet cable (the special tool cost me more than an Ethernet cable would have, so I guess I consider making an Ethernet cable that actually works to be a ‘badge of honour’). To connect my computer which is in my second floor study to our wireless router which is on the first floor, I creatively, although possibly not wisely, ran the Ethernet cable through the central vac pipe (!) from the second floor down to the basement, and then up through the floor to the wireless router. The Ethernet cable vibrates a lot when the central vac is running :-(, but (so far) the connection is fine.

However, an iPad or iPhone used to initiate a live stream can not be directly connected to the wireless router using an Ethernet cable and must use a Wi-Fi connection. That said, most of the ZOLAS live streams to date (see Background below) have been initiated using an iPad or iPhone, and the Wi-Fi connection has not been an issue. So, in my opinion, for Facebook Live in practice this is not a disadvantage.

As I stated above, the device used to initiate a live stream – computer, iPad, or iPhone – must be positioned so that video produced by the built-in webcam is framed properly. The device will typically be positioned several feet from a soloist, and across the room for a duo. In addition, I have found that the best framing is achieved when the webcam is at the performer’s eye level (or, in the case of a duo where one performer is sitting and the other is standing, at the performers’ average eye level).

Positioning an iPad or an iPhone at eye level is not difficult. A range of frames are available which hold the iPad or iPhone and mount on a mic stand. For my iPad I use TheGigEasy iPad mount which I like because it mounts on a mic stand like a mic clip and lets me position my iPad vertically (portrait) or horizontally (landscape), and flat (parallel to the ground), upright (at right angles to the ground), or at any angle in between. My wife bought this universal mount for her smartphone. It mounts on a tripod but with this 5/8” female to ¼” male adaptor, it also mounts on a mic stand like a mic clip.

Positioning a computer so that the built-in webcam is at eye level may be difficult or impossible, especially if the performer(s) is/are standing up.

I realize that this is a different conclusion from the title of this article: ‘Use a Computer For Your Live Stream’. However, that was my conclusion when I wrote the detailed technical user guide ‘Live Streaming Stay-at-Home Musical Performances – Technical User Guide’ (see Background below) back in April and early May before the ZOLAS live streams had started, and which I have not updated since then (although clearly I probably should). I now have the benefit of experience from the ten ZOLAS live streams to date.
Background 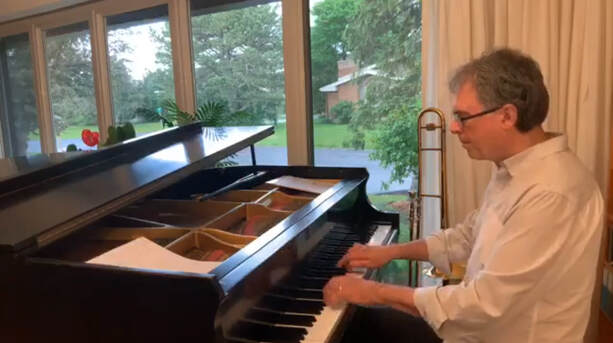 Image 10
Organizing the series includes having Zoom meetings with the performers in the series as required (some of them are self-admitted ‘luddites’, so our Zoom meetings are looong and painful, although by the end I get them ‘from zero to sixty’) to a) determine the best technical setup for their live stream performance, b) do a step-by-step walk-through of how to set up and initiate a live stream, and c) do a test end-to-end live stream. I’ve authored a detailed technical user guide ‘Live Streaming Stay-at-Home Musical Performances – Technical User Guide’ for the performers to use as a reference document after our Zoom meeting, and which you can access (read only) at this URL. Appendix B of the reference document provides twelve technical and non-technical tips on live streaming musical performances based on my technical investigation and on the experiences from the ZOLAS live stream performances so far:
​
Technical Tips
​
Non-Technical Tips