BACK TO INDEX
Disclaimer: The opinions expressed in this article are those of the author and are not necessarily those of Ottawa Jazz Happenings or of JazzWorks Canada.
How to Travel Across Canada in a Pandemic Without Leaving Home

What was it like to write a piano solo suite with a specific timetable during the pandemic? What was my creative process? That was David Miller’s pitch to me for this article.

The challenge: Write a piano solo for each Canadian provincial and territorial floral emblem

What was promised:  Compose a piece a week for eleven weeks, perform seven online concerts every two weeks, and wrap up with a final concert of all the works

The whole thing started in 2019 with a song called “Lady Slipper” that I composed after visiting the Purdon Conservation Area near Perth. It is the home of an enchanting colony of lady slippers that blooms in late May and early June.

Like other musicians, I saw several musical events and projects cancelled in the spring of 2020. This turned out to be an advantage for me, as I was able to book some composition lessons with Phillip Greenlief, a saxophonist, improviser and composer from Oakland, California. Phillip also had tours and engagements cancelled, so he was available. I met Phillip at the Banff Centre for the Arts when I was at a musician residency in the fall of 2019. Phillip was on the faculty and I was working on a recording with flutist Jessica McMann.

Phillip asked me to write a tune as the basis for some harmonic exploration. This was around the time that trilliums were starting to emerge in my garden and I wrote a little ditty for the trillium. Since Lady Slipper is the provincial floral emblem of Prince Edward Island and Trillium is the floral emblem of Ontario, the Canadian Floral Emblems Suite took root.

As a response to the pandemic, the Canada Council announced the Digital Originals fund. Artists could apply with a proposal to showcase original works online. I applied with my idea to complete and perform the Canadian Floral Emblems Suite and was awarded a grant at the end of July. In the meantime, I had a composed a piece for my sister’s birthday scored for piano and viola. I repurposed it for solo piano as Prairie Crocus for Manitoba.
​
But now the pressure was on. I had proposed a fairly aggressive schedule that was already behind when I was notified that my application was successful. But I already had three pieces in hand and only needed ten more.
I drew up a schedule. It was a spreadsheet that became a living document — endlessly tweaked, rearranged and triumphantly updated when compositions and concerts were completed. This is the final version of the columns that I deemed to be important.

My schedule was based on my limited experience of composing within deadlines once before. For that project I only needed three pieces and they were composed fairly quickly. I felt comfortable that I was allowing myself enough time.

My composition “process” for this suite evolved over time. I did some basic research about each floral emblem and dropped notes into the spreadsheet that I could use to generate musical ideas. I wanted to vary time signatures and key signatures for each piece, so I also noted these in the spreadsheet. The index column held key words about the concepts and moods I wished to convey for each flower. Initially I had an arbitrary order of composition, but I didn’t stick to it. I would start songs whenever inspiration struck. Sometimes inspiration came quickly, sometimes fuelled by desperation. The songs furthest along in development became the drivers of what would be programmed for the next concert.

Working with Phillip kept me accountable and on track. We met weekly and I would usually have one song near completion and other one at the beginning stages for him to review and offer suggestions. There was also the pressure of having two concert-ready pieces ready every two weeks, not only composed but also performance-ready. I also had to create introductory scripts and posters for each concert. As time went on, my completion times crept closer and closer to the concert dates. At one point, I had to admit that I only had one piece ready for a concert and I had to add an additional concert to the series. This gave me a little bit of breathing room, but at this point I had a few more pieces on the horizon with no ideas to match.

To help stimulate images and perceptions of flowers and places, I enlisted friends to share some of their memories with me. I joined an improvisation class that Phillip was running online which also helped me with my composition practice.
​
Nunavut’s purple saxifrage was the piece that came closest to the wire. I visited Nunavut once for a work project, but it was in the middle of winter and I had never seen their territorial flower. I had a severe case of composer’s block and only needed one more piece for the last concert. I set aside my laptop and got out the scissors and glue. I found pictures of purple saxifrage on the internet and printed them out. I created my first graphic score which yielded the structure of the piece and some melodic inspirations. With that in hand, I was able to move forward and complete the suite. 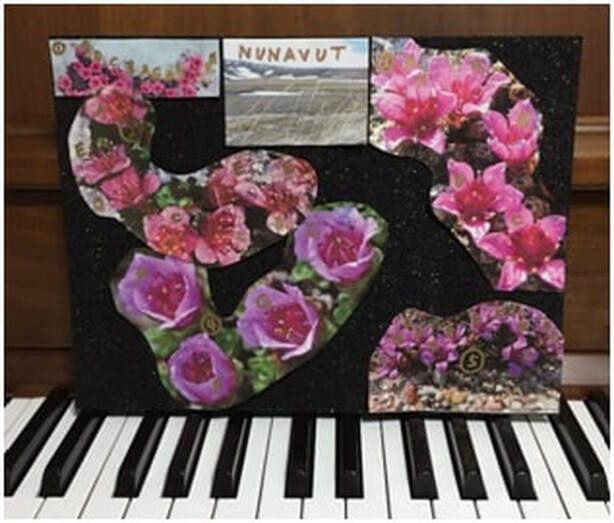 That was the compositional side of the project. I couldn’t have gotten through the live-streaming part of the project to record concerts every two weeks without the expert and caring help of Chris Thompson. His technical suggestions are documented in another article. Chris also checked in on me after every concert and gave me feedback to improve my offerings.

When it came time to record my final concert, I had the blissful experience of leaving the entire technical side of things to Normand Glaude at Morning Anthem Studio. Finally, I was able to just concentrate on performing on his lovely vintage Steinway piano.

With the help of excellent mentors, teachers and friends, I was able to complete the Canadian Floral Emblems suite within the allotted timeframe. I also learned a lot about composition, Canadian history, geography and plant lore. By composing thirteen pieces, one for each territory and province, I was able to travel across Canada during a pandemic without leaving home.

How Can I Hear the Pieces?

The floral emblems program will be part of the longer summer carillon recitals on July 6, August 3, 17, and 31.
Beverley's offering for British Columbia, “Pacific Dogwood” will be included in Dr. McCrady's special recital for the 150th anniversary of British Columbia joining Confederation on July 20 at noon.

For more information about Canada’s provincial floral emblems and links to the concerts, please visit my website.

Beverley McKiver
beverley.mckiver@gmail.com
BACK TO INDEX