UPDATED: Combining Vocals and a Backing Track in a Zoom Meeting –

This article is a reworking of my email reply to the vocalist member of the JazzWorks community who approached me. I felt that the contents of that email would be of interest to other vocalist – and possibly instrumentalist – members of the JazzWorks community. This article identifies, explains, and gives the pros and cons for four alternative technical solutions for combining vocals and a backing track in a Zoom meeting. Using a USB microphone is also briefly addressed as part of this. Which solution is best for a given vocalist will depend on a number of factors including what equipment the vocalist has, the vocalist’s technical level and experience, their personal preference, etc. Therefore, this article does not rank the four solutions, or recommend one solution over another.
Combining Vocals and a Backing Track in a Zoom Meeting - A Technical Perspective

My ever-patient wife Cathy and I tried this. I set up a test Zoom meeting and sent her the URL to join, she joined the meeting with her audio (and video) on, played a backing track on her computer, and sang along with it. This didn’t work. I could hear her singing clearly, but I could not hear the backing track at all, even if she turned the volume of her computer’s built-in speakers up full.

Why didn’t this work?

You might expect that the computer would automatically combine her singing with the backing track internally. However, it doesn’t work that way. With Zoom, you select the audio source by clicking on the up arrow beside the microphone icon and selecting the desired audio source under ‘Select a Microphone’ in the pop-up menu. In Image 1 below I have selected the internal microphone of my Windows laptop as my audio source for the Zoom meeting. Note that you can select only a single audio source. You cannot select more than one audio source and have Zoom combine them. 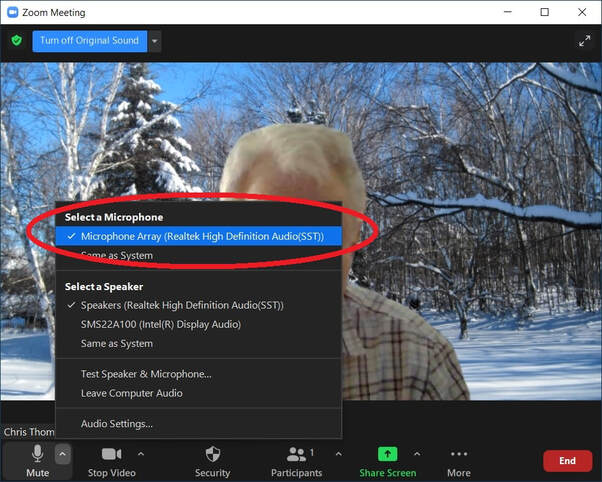 This solution was provided to me by Betty-Ann Bryanton (thanks, Betty-Ann). With this approach, the vocalist, who is a participant (not the host) in a Zoom meeting: 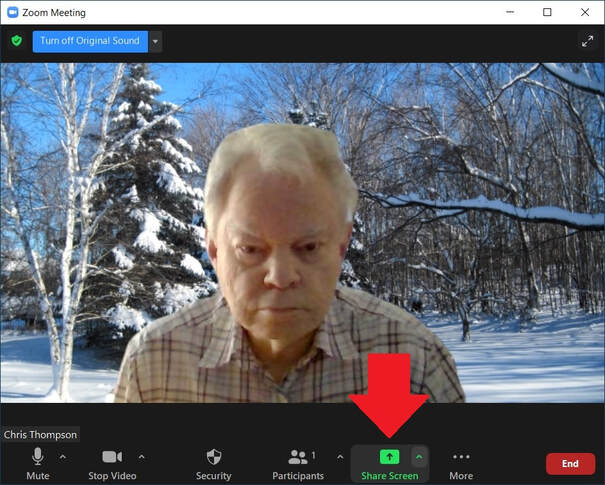 Image 2
Note: The host of the Zoom meeting must have allowed the vocalist to use ‘Share Screen’ by a) clicking on the up arrow beside ‘Share Screen’, b) clicking on ‘Advanced Sharing Options...’ in the pop-up menu, and then c) selecting ‘All participants’ under ‘Who can share?’ in the ‘Advanced Sharing Options’ pop-up menu, as shown in Images 3 and 4 below. 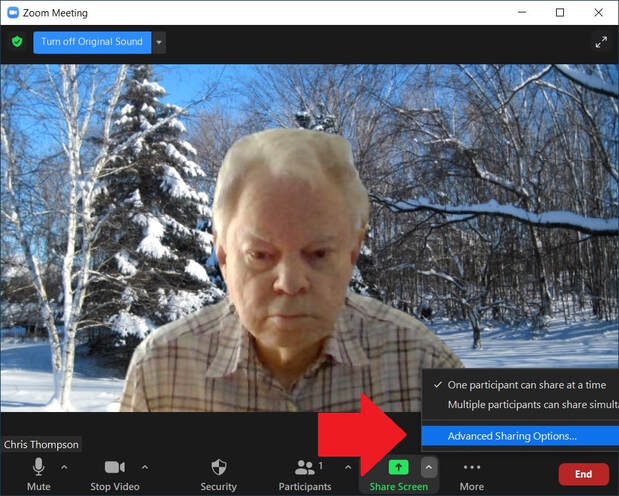 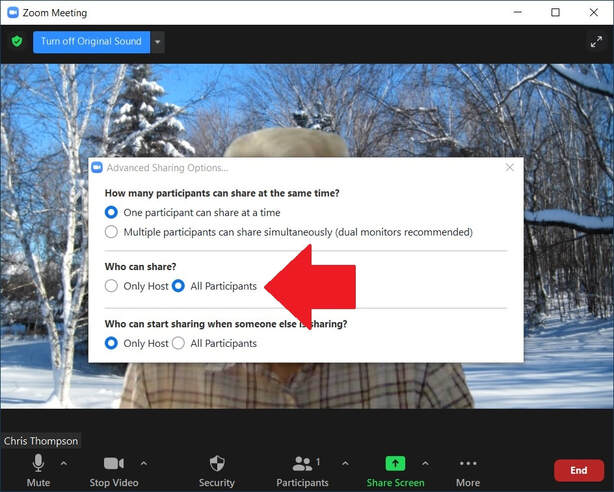 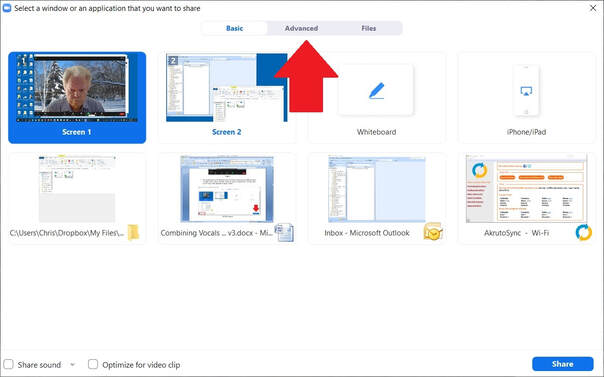 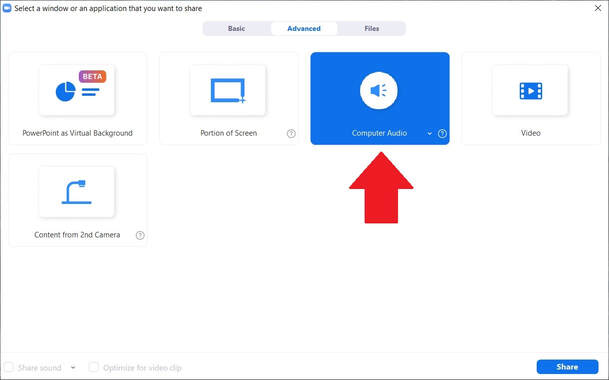 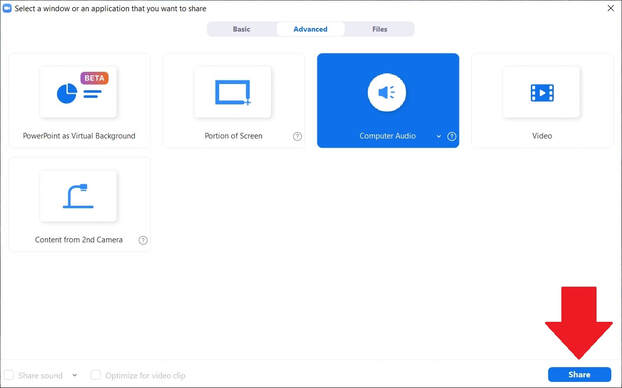 Image 7
3.  Plays the backing track and sings along with it.

Cathy and I tried this approach. I set up another test Zoom meeting and sent her the URL to join, she joined the meeting with her audio (and video) on, followed Steps 1 and 2 above, played a backing track on her computer, and sang along with it. I could hear her voice and the backing track. However, there was an issue:


Note: The vocalist does not need a Zoom account in order to record a Zoom meeting locally on their computer. 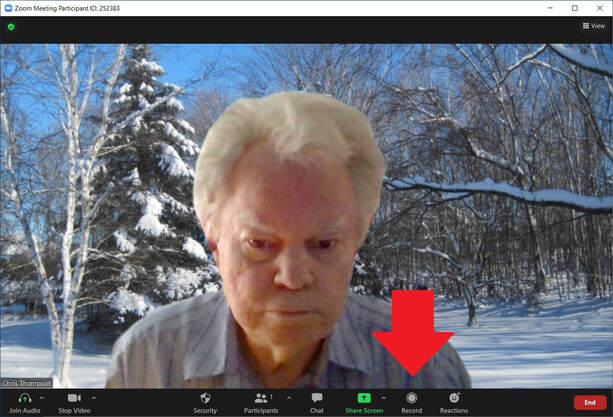 Image 8
The major disadvantage of Solution 1 is the inconvenience of the vocalist getting the right balance between their voice and the backing track that other participants in a Zoom meeting hear.

Solution 2 – Mixer Connected to Computer ‘Through the Air’

The remaining three solutions in this article allow the vocalist to combine the vocals and the backing track and get that into the Zoom meeting without using Zoom Share Screen.

With Solution 2, as shown in Image 9: 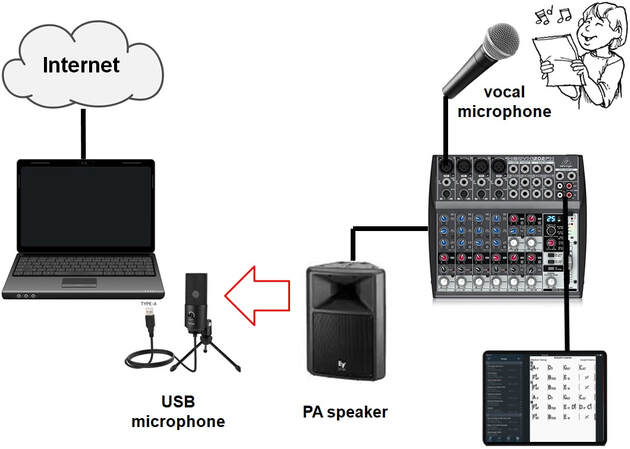 Note: A USB microphone looks like a traditional microphone, except that its output is digital – it has a cable with a USB A (the large one) plug at the end which plugs into a USB port on a computer. The output of a traditional microphone such as the Shure SM58 is analogue – it has either an integrated XLR jack which plugs into an XLR jack on a mixer using an XLR cable (aka a ‘mic cable’), or a cable with a ¼” plug at the end which plugs into a ¼” jack on a mixer. For the ZOLAS live streams, I purchased from Amazon.ca a relatively inexpensive and yet good quality USB microphone – the Fifine USB microphone (an ‘Amazon’s Choice’ – link). One reason for using a USB microphone is that it will typically be better quality than the computer’s built-in microphone. There are other reasons. However, these reasons and considerations when purchasing a USB microphone (e.g. condenser versus dynamic, cardioid versus omnidirectional, mono versus stereo) are beyond the scope of this article and the subject of another article.

With this approach the vocalist hears the same balance between their voice and the backing track as the other Zoom meeting participants are hearing – i.e. the sound from the PA speaker. This is the approach that Caroline Cook used for her November 10th, 2020 ZOLAS live stream (Image 10 below). You can access the video of her live stream at https://www.facebook.com/caroline.cook.167/videos/3731423400236569 – check out 15m00s. Her sound system is playing her voice (picked up by her vocal microphone which is connected to one of her mixer’s inputs) and the backing track (from her computer which is another input on her mixer), and the sound from her sound system is being picked up by the built-in microphone in her Samsung smartphone on which she initiated the live stream. 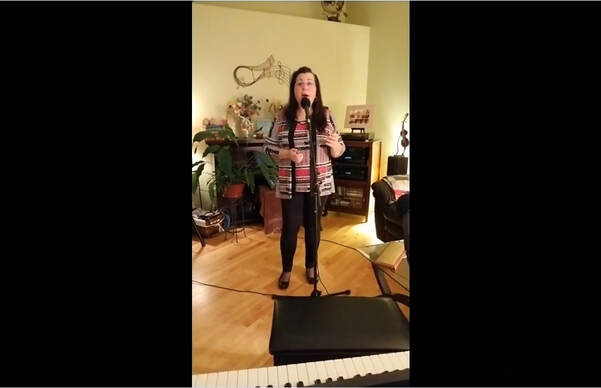 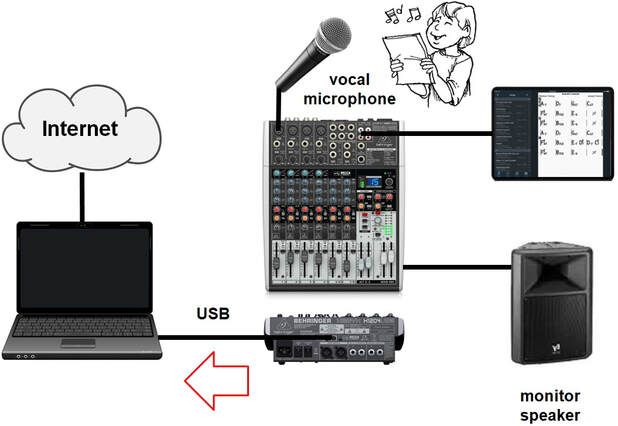 Note: If the vocalist’s mixer is not a USB mixer (i.e. does not have a USB port), my August 19, 2020 article in the JazzWorks COVID article series discusses how to use a ‘VHS to DVD’ converter to connect a non-USB mixer to a computer as an external audio source.

Solution 4 – Vocals and Backing Track Combined ‘In the Air’

Solution 4 is a variation of Solution 2 above, as shown in Image 12: 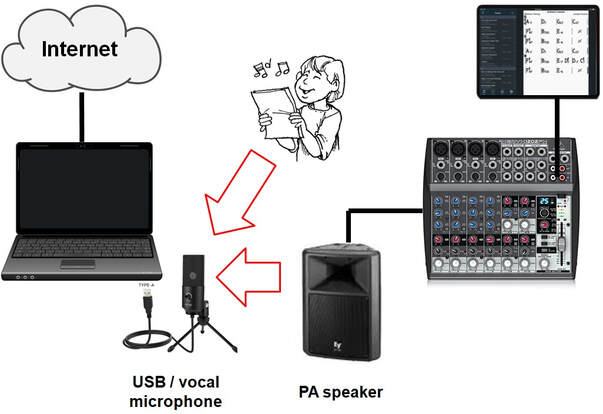 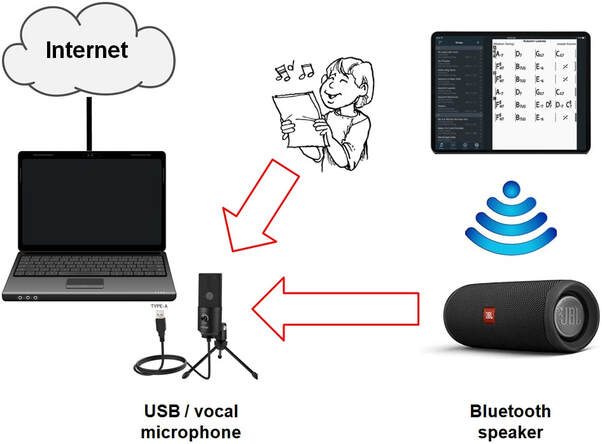 Image 13
There is a fifth solution which involves using so-called ‘streaming software’ such as Open Broadcast Software (OBS) which, like a mixer, can combine multiple audio inputs. Only four ZOLAS live stream performers to date have used streaming software for their live streams, and this was with Facebook Live – not with Zoom. I believe that streaming software can be used with Zoom, but I have no experience with this. Furthermore, these four ZOLAS live stream performers were all 1) very technical, 2) very computer-savvy, and 3) had LOTS of time to figure things out, identify and resolve issues, and get things working properly. Therefore, this solution is not described in detail in this article.​
Background

I’m a retired Professional Engineer (degree in Electrical Engineering). I worked for 23 years at Bell-Northern Research/Nortel in Ottawa, Canada, designing telecommunications services. I’ve been playing drums and electric bass in gigging big bands and small jazz ensembles since 1970 (fifty years!). Playing in bands kept me sane when I was in school and working, and is now (or at least it has been until last year) my major retirement activity. I’m currently the drummer in the big band Standing Room Only and was the bass player in the bossa nova trio Wave until it disbanded (pun intended) in December 2019. Having a technical background and being a gigging musician proved very valuable for my involvement with live streaming musical performances, since it allowed me to bridge the two areas.
I organized the ZOLAS stay-at-home live stream jazz performance series from May 2020 until December 2020. During this time there were 25 (!) live stream performances in the series: 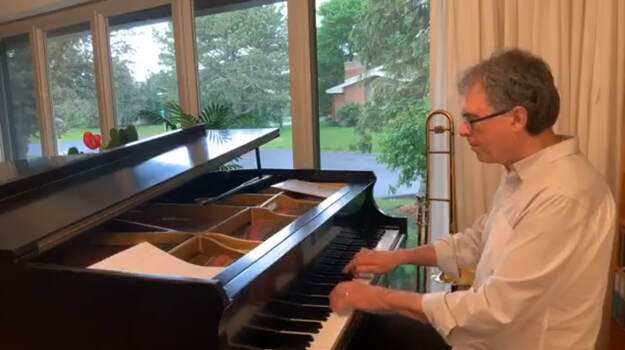 Kate Dunn, 16-December-2020 - "Just wanted to thank you for that excellent column you wrote on combining voice and backing track during Zoom events. Very informative and useful."