In the current COVID-19 crisis, many musicians have turned to live streaming musical performances* from their homes to at least partially replace their lost income from live performing and teaching, and/or because they miss performing. An example is the Canadian National Arts Centre’s ‘Canada Performs’ series. Musicians who at the beginning of March 2020 didn’t even know what a live stream was have scrambled to come up to speed so that they could put on live stream performances from their homes.

* The word ‘performance’ in the remainder of this article refers to a ‘musical performance’.

I got involved with live streaming at the end of March 2020 when Carmen Vacchio, General Manager of Zolas Italian Restaurant in Bells Corners, asked me to help him with live streaming performances by Zolas jazz performers in order to help support Zolas’ takeout and delivery business during this very difficult time for restaurants. I had been booking the performers for Zolas’ ‘Live Jazz Saturday Nights’ program for the previous two years. Being an engineer (and borderline OCD – not a job requirement, but definitely an asset), I like to think about things and, if possible, generate lists and/or spreadsheets. As I’ve learned over the years, this can be very annoying to non-engineers – and especially spouses. During the past two months I’ve watched a lot of live stream performances and thought a lot about live stream performances in general. I’ve noticed and have been keeping a running list of the benefits of live stream performances over live performances. Here’s my current list:

3.  audience members can be anywhere in the world (the ‘death of distance’), so that live stream performances literally can and do have ‘global audiences’

4.  audience members can enjoy live stream performances by performers whom they like but would otherwise not be able to see perform (e.g. NAC’s Canada Performs series)

6.  every audience member has ‘the best seat in the house’

Note: Lucas Haneman’s and Megan Laurence’s May 9th, 2020 performance in the ‘Zolas Live Jazz Saturday Nights ONLINE! live stream performance series – the first one in the series – had a maximum of 60 viewers at the same time during the live stream but, two days later, had had over 1400 views (more than twenty times as many!). 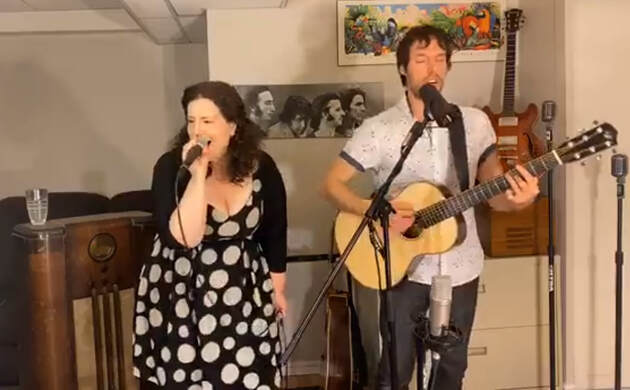 How long will the current live stream performances last? My own feeling is that, in the case of restaurants,  these will last at least until there are no social distancing restrictions, which likely won’t be until there’s a vaccine, which is currently seen by health care professionals as best case a year away. With social distancing restrictions in place, restaurants won’t be able to have the number of customers in their dining rooms that they need in order to cost-justify hiring performers. The same goes for GigSpace and other performance venues. Not what anyone wants to hear (denial is not just a river in Egypt), but I believe that’s the reality.

It’s becoming more and more apparent that, coming out of the COVID-19 crisis, it’s going to be a very different world and a very new ‘normal’. Musicians who are being forced to use live streaming for the first time to make up for their lost teaching and (especially) performing revenues, and/or because they miss performing, are discovering the powerful benefits of live streaming over live performances. I believe that the ‘new normal’ will still have live performances, but possibly fewer, and a lot more live streaming.
Comments

Davina Pearl, 16-August-2020 - "​I very much appreciate all the careful thought that you put into your articles. It’s an amazing way of supporting our little community during these times. It’s heartening to read them, and to build hope that we will find some excellent ways to overcome the challenges of our new reality.”
​​
Devon Woods, 17-June-2020 - "Very interesting and relevant series of articles by Chris Thompson."

Tim Leah, 13-May-2020 - "Great article, Chris. If you ever have a notion, an easy to read guide on how to set up a live stream performance (e.g. live stream for dummies!).
BACK TO INDEX