​Note: Since the beginning of April I've acquired a fair depth and breadth of practical knowledge regarding live streaming musical performances, due to a) my two week technical investigation of Facebook Live and YouTube Live at the beginning of April (see 'Background' below), and b) my organizing the 'ZOLAS Live Jazz Saturday Nights ONLINE!' live stream performance series including, as required, mentoring series performers using a range of physical setups on doing live streams (see 'Background' below). Please feel free to phone me (613-692-5380) or email me (chris101t@bell.net) if you would like any advice on/assistance with live streaming your musical performance(s). My fee is a donation of whatever you feel is appropriate to the GoFundMe campaign for the ZOLAS series, every penny of which (after advertising expenses and GoFundMe's service charge) will go to covering performers' fees.

This is the second in a series of twelve articles. Each article discusses in detail a technical or non-technical tip for doing live streamed musical performances. This article discusses Tip 2 ‘Use an Internet connection with the highest upload speed possible’.

Most of the audio and video quality issues I’ve observed with live streamed musical performances – for example ‘pixilated’ video and momentary gaps in the audio – I believe are due to insufficient Internet connection speed, in particular an insufficient upload speed.

I was working for Bell-Northern Research back in the late 1990s when Internet access over phone lines was developed. At that time, the Internet was being used mainly for simple text emails (no attachments yet) and for accessing websites. Accessing websites involved a relatively small amount of data – typing a URL – going upstream, and a relatively large amount of data – webpages – going downstream. Internet access over phone lines wasn’t very fast, and so some people referred to ‘www’ not as the ‘world wide web’, but rather as the ‘world wide wait’. Therefore, Internet download speed was made as fast as possible, in the order of 10 Mbit/s (mega (million) bits per second), at the expense of upload speed which was in the order of 1 Mbit/s (my own personal experience is that the upload speed was more like 200 Kbit/s (kilo (thousand) bits per second). In fact, the technology was referred to as ‘ADSL – Asymmetrical Digital Subscriber Line’, where ‘Asymmetrical’ referred to the asymmetry of the upload versus the download speed.
​
Bell’s current offering of Internet access over phone lines is their ‘Internet Plus’ service. As Image 1 shows, the maximum download speed is 5 Mbps and the maximum upload speed is 0.68 Mbps – fourteen times less! 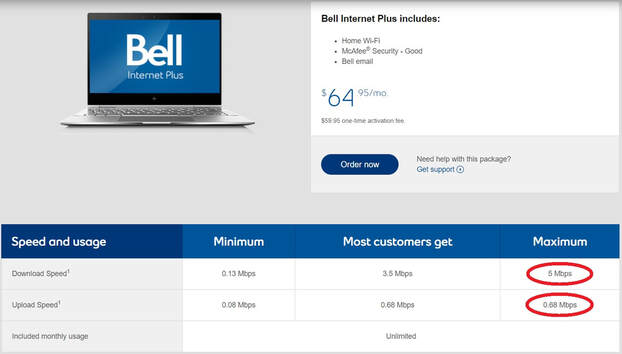 Image 1
​Internet access over cable continued this asymmetry, and even with Rogers Fibe Internet where the backbone is fibre but the connection to the home is coaxial cable, this asymmetry has continued, as shown in Image 2 on the left. Note that, while the download speed is up to 1 Gbps, the upload speed is only up to 30 Mbps – 33 times less!

Asymmetrical Internet access is a big problem for live streaming where, atypically, much more data is being sent upstream (the audio and video) than downstream (comments). Internet access over fibre to the home is more recent, and reflects the current situation where typically as much data is being sent upstream as downstream – for example Zoom meetings, uploading and viewing YouTube videos, and sending emails with large attachments – and where the upload speed is as important as the download speed. You can see this in Image 2 on the right where Bell Canada’s Gigabit Fibe Internet access offers download and upload speeds that are the same ‘order of magnitude’ – up to 1 Gbps download speed and up to 750 Mbps upload speed.

Image 2
​So for live streaming it’s important to have as high an upload speed as possible. If you’re still on ADSL, good luck! I suspect the performer in Image 3, whose live streams are always characterized by highly pixilated video and frequent momentary gaps in the audio, is on ADSL (she lives in Provincetown, Cape Cod, Maine). 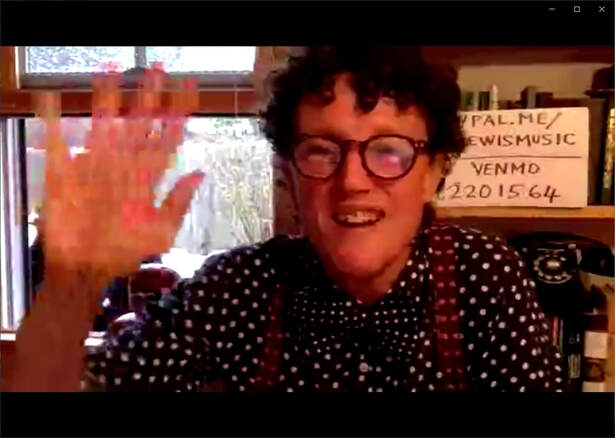 Image 3
​On the other hand, the live streams by the performer in Image 4 feature high quality audio and video, and so I expect he is on either Rogers Fibe Internet or (even better) Bell Canada’s Gigabit Fibe Internet. 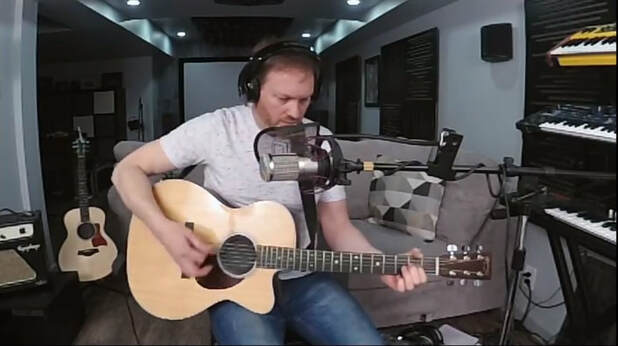 Image 4
Therefore, if possible, for live streaming subscribe to an Internet access service with the highest upload speed possible – fiber/coax service as a minimum, and preferably fiber to the home service.

Note: Tip 2 applies to ‘live live stream’ performances, for example using Facebook Live as opposed to ‘pre-recorded (aka ‘live-to-tape’) live stream performances’, for example using Facebook Premiere. With the latter, the performer is uploading a video file over their Internet connection instead of streaming live video and audio, so the performer’s Internet access upload speed doesn’t matter. A slower upload speed just means that the video file will take longer to upload. In other words, uploading a one hour video file is ‘non real time’ and can take many hours, while streaming a one hour performance is ‘real time’ and must be done in an hour. 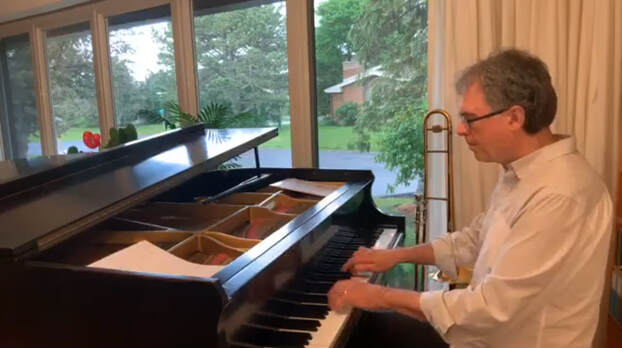 Image 5
Organizing the series includes having Zoom meetings with the performers in the series as required (some of them are self-admitted ‘luddites’, so our Zoom meetings are looong and painful, although by the end I get them ‘from zero to sixty’) to a) determine the best technical setup for their live stream performance, b) do a step-by-step walk-through of how to set up and initiate a live stream, and c) do a test end-to-end live stream. I’ve authored a detailed technical user guide ‘Live Streaming Stay-at-Home Musical Performances – Technical User Guide’ for the performers to use as a reference document after our Zoom meeting, and which you can access (read only) at this URL. Appendix B of the reference document provides twelve technical and non-technical tips on live streaming musical performances based on my technical investigation and on the experiences from the ZOLAS live stream performances so far:
​
Technical Tips
​
Non-Technical Tips